Windows Through Time - A collaboration between Troy Nickle, Mark Jirsa, the Minnesota Geological Survey and the University of Minnesota 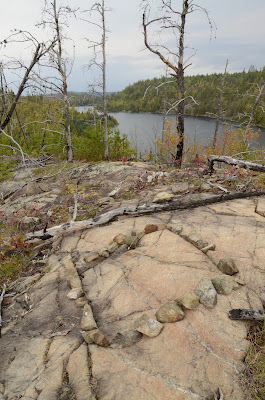 Is time merely a limited linear concept created by mankind so that we can understand the passing of the days, weeks and years?  We seldom think of time on a vast scale encompassing thousands, millions and even billions of years. I wonder what the earth looked like a billion years ago. How has our earth formed and evolved over that period of what we call time? It’s hard to fathom, but I had the opportunity to take a 6 day trip with geologist Mark Jirsa into the Boundary Waters Canoe Area Wilderness, (BWCAW), to gain an understanding of Minnesota’s ancient bedrock crust and had a glimpse of what the earth might have looked like millions of years ago.


Mark focuses on precambrian geology, studying and mapping many of the rock outcrops in the BWCAW and throughout Minnesota to improve our understanding of crustal evolution that spans nearly 3 billion years. Many of the exposures in the Boundary Waters area provide examples of some of Earth’s oldest and most complex crust – the core of the North American Continent. Much of the bedrock in Minnesota is covered by hundreds of feet of glacial sediment.  The bedrock in Superior National Forest which includes the BWCAW is near or at land surface, creating exposures that are sufficiently large and closely spaced allowing it to be mapped in detail. 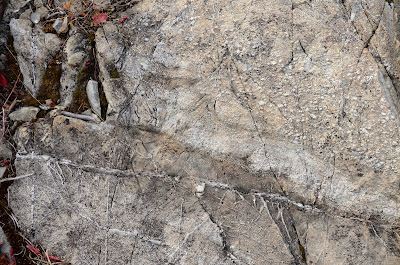 Mark tells me that he is trying to uncover the geological story behind the formations in the rock. The once flat-lying strata has been folded, metamorphosed (thermally altered), faulted and now stand nearly on end. Like a detective Mark looks at the rock and tries to uncover the story behind it. He looks at the layers measuring the direction with a compass, determining the strike or trend of the layer and if possible the angle the layers recede into the rock, (the dip) and tries to determine which way is up, (the topping) formed by an understanding of the sediments in the layers, and how sediments settle- usually the heavier sediments settle first then the lighter ones later. He takes a UTM (Universe Transverse Mercator) reading of the location and writes a variety of geologist nomenclature on the sediments that formed the rock, the type of rock, fault lines and other information that will help him form detailed maps of the geology. Mark is seriously passionate about his work and it is not hard if you’re near him to soon be consumed with trying to understand and uncover the geological story at how this ancient bedrock might have formed. 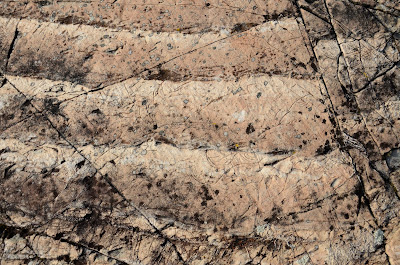 It took us 2 days to paddle out to our base camp in the south arm of Knife Lake. There Mark and I developed a collaboration that would bridge geology with art. Mark was really amazing to work with and helped form some of the ideas driving the work.  Through a discussion of where this work could go and how to relate art with geology we decided to frame key areas of rock formations, sediment layers, fault lines and other interesting areas of bedrock as windows looking back into the ancient past. I used locally available materials like stone, wood or reeds to create the frames placed over areas of bedrock and created a frame that was 1 meter square and corresponded to a UTM location.  Mark took notes of the location, the strike, dip, topping, type and age of rock, sediment formations and numerous other details which will be part of the work while I created the frame and took a detailed image of the rock within the frame and an image of where the work exists in context to the land. Each rock formation is like a unique drawing that forms interesting lines and textures telling a story of an ancient world. During one day of mapping we documented 10 sites while hiking through the Knife Lake burn of 2011. We walked through thick brush, fallen trees and endured the high winds, heavy rain and  later were rewarded with a spectacular view.We covered a large area and when we got back to camp made plans to cover other areas on our route back. 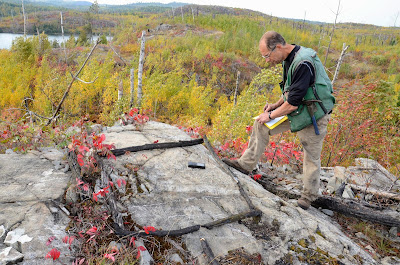 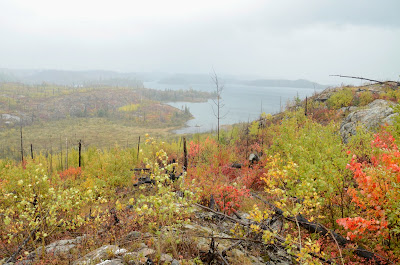 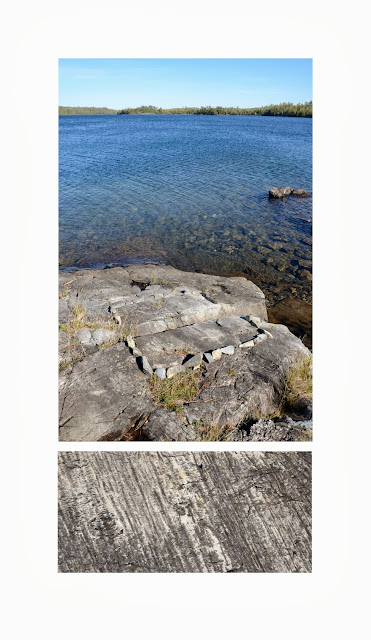 Over time there has been drastic change to the landscape which I learned are traceable through the stone. From continental seas that once covered North America, sediment laden rivers, volcanism, to multiple episodes of tectonic plate collision. It makes me wonder about how we perceive time. Many of these stones seem immovable but were once liquid lava entering an ocean, or sand, mud and silt carried in turbidity currents to eventually settle on an ocean or river floor, overtime forming into solid bedrock then later to be thrust to the surface by a tectonic plate collision. 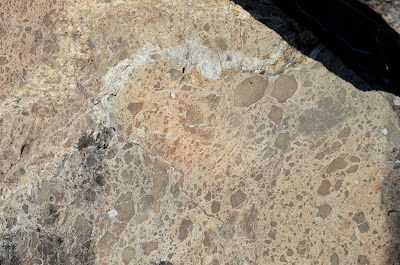 Paddling for Invasive Weeds in the Boundary Waters 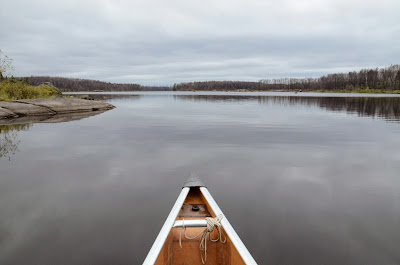 After 17 hours of driving from Canada I finally arrived in Ely, (pronounced Elee) Minnesota, a town filled with canoe enthusiasts, canoe outfitters, outdoor enthusiasts, fishermen and hunters all taking advantage of the nearby Superior National Forest and the Boundary Waters Canoe Area Wilderness. My first impression of this little town reminded me of mountain towns in Alberta and British Columbia, Canada, although instead of seeing mountain bikes on the car roof rack you would usually see canoes.  Our journey into the Boundary Waters Canoe Area Wilderness would involve a 4 day trip with fellow artist Anaya Cullen, Forest Service ecologist Jack Greenlee and biological technician and wilderness ranger Becca Orf. Jack and Becca are working in the Boundary Waters to monitor and mitigate invasive plants. The work that they undertake involves paddling out to the many camp sites along the network of lakes within the Boundary Waters to check the progress of invasive plants, map the locations with GPS and pull the plants. The plants that they target are not native to the area, and were usually introduced during European settlement. Many of these plants overtake an area and are hard to remove due to large interconnecting root systems. Plants like Canada thistle can shade out native plants and knapweed releases a toxin in their roots that affects most native plants, hence the name invasive. Some of these plants include Canada Thistle, Common Tansy, Hawkweed, Knapweed, Ox Eye Daisy, Leafy Spurge and Purple Loosestrife to name a few. 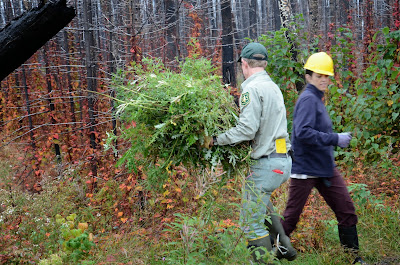 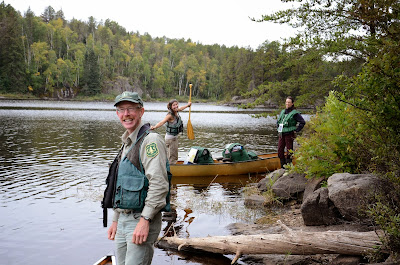 On this trip we were looking at an area that had burned in the Pagami Fire. The area had a unique beauty to it as the bright red and orange bind weed that covered the forest floor was creeping up the black charred pines. Many of the new growth included a large number of Jack Pine whose seeds stay dormant until the heat of a fire burst the seeds open. Jack took notes of the new vegetation occupying the burned area. 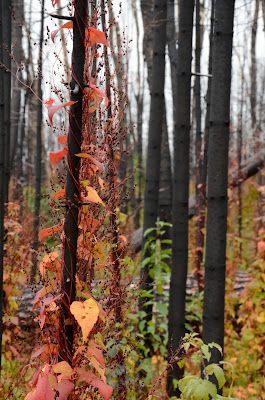 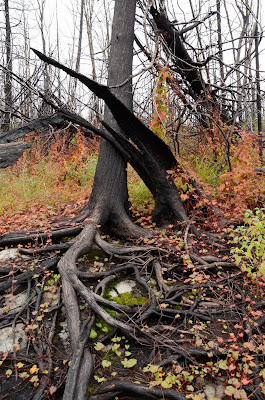 On our trip we would travel through more than 5 lakes and portage canoe and gear more than 8 times, some portages as long as half a kilometer. We camped and paddled in pouring rain and while trying to wait the rain out sat under a tarp, shared chocolate and  played cribbage on a homemade crib board with Forest Rangers Chris and Terry who were working at our site. It turned out to be a great rain day! 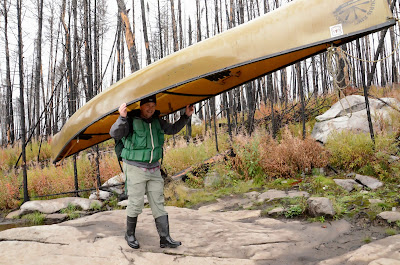 Paddling through the area was a delight; some of the exposed rock in the Boundary Waters, part of the Canadian Shield, is some of the oldest rock on the planet. We often saw common loons, ducks, Canada geese, bald eagles, squirrels, and a variety of interesting mushrooms and vegetation. 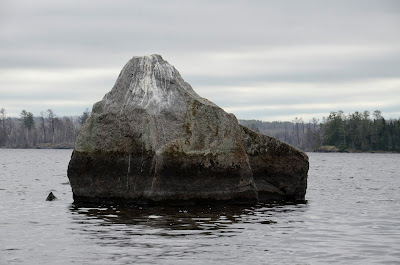 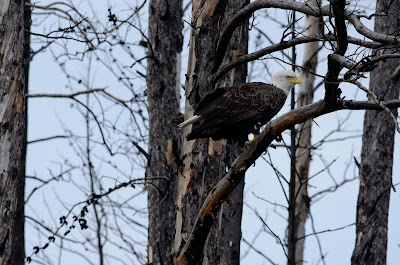 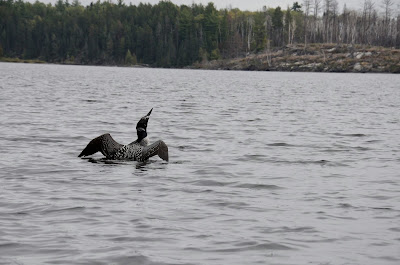 The work that Jack and Becka do made me consider what is the relation of my art to the environment, and how can I utilize invasive plants in my work to build on an awareness of these plants and perhaps even mitigate these populations. Part of mitigating invasive weeds involves pulling them so I intend to immerse myself in areas with invasive plants to collect them for my work. I am interested in my art playing a role in mitigating invasive plants and the aesthetics of creating something visually interesting from them. 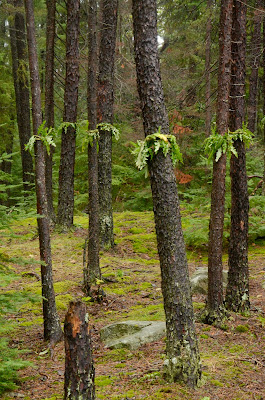 Posted by Troy Nickle at 2:00 PM No comments: